If I were asked to describe, in a word—two at the most—my recent travel to France and Ireland, magical would compete with wonder-filled. Wonderful hasn’t the capacity. I was away for seventeen days, and not until I returned did a single mishap threaten the absolute perfection of this trip. But it was only a threat; the piece of luggage was located and had not been left between here and Dublin after all. Glitch-free travel! Alright—one bellyache from downing a Guinness too quickly, when it was time to load up and get back on the road to the next attraction. . . (Try black current syrup with it the next time you have a pint. . .)

I did not miss, as in emotionally, the daily rounds of rancor and surprise on the news, though I couldn’t help to peek now and then, but only to make sure the United States was still somewhat intact. I share—to my psychological peril—my late father’s penchant for believing that his continued observation—via the television—kept the Great Experiment afloat. (Seeing this in writing brings the sad point home.) Hasn’t it been supported by physics? Observation affects the outcome? If not to guard against total and complete destruction, then possibly in keeping with lighting a candle in a church—which I did, in St. Rémy-lès-Chevreuse. Maybe “observance,” in this light, is better served.

The French quotidian habit of walking to a bakery for daily bread remains a touchstone; that of stepping into the rarefied air of recently baked loaves, admiring their crusty light-brown selves standing upright and righteous in the racks; of greeting the clerk (essential) and being greeted in return; of inspecting the pastries and biding my time for the one éclair I know I’ll buy before leaving.

Micheline and I also visited a communal farm, Coubertin, where we bought two kinds of goat cheese, a bottle of pear cider, a slice of “white cheese” tart to split and a jar of duck pâté for my husband. We’d just missed seeing the goats being milked, a treat for children of all ages. Now I want to learn to make goat cheese. I’m determined.

only seventy minutes away, as it happened. A feast of flowers, the garden is anchored on both ends by his rose-painted, green-shuttered home and the famous pond of water lilies. We were lucky to arrive early, as the grounds weren’t too crowded.

I was struck by the number of Japanese prints in nearly every room of the house, and the number of pilgrims from Japan who quietly, reverently, roamed the paths. Alas, there were no original Monets, but copies filled a need, and the town boasts several opportunities to see his work. We spent nearly four hours exploring, sitting, admiring and—sighing. I would wish to return when the tulips and wisteria bloom in early spring.

Another purpose waited for me—to leave a dusting of a friend’s ashes. Yet another painter inspired by the poppies of Monet.

From that good visit—and farewell—to Ireland’s impossibly green fields, I was met by a gaggle of champagne-sipping friends, who could have cried, “Look what the cat dragged in!” à la Mamma Mia. Oh, it was grand! sings my refrain. All of it. From the high teas (You’ll get fat! warned a Scottish friend), to roses and bronze horses, to stone architecture (few examples in rural Wyoming), to lovely accents, laughter and gasps; well, I could go on. . .

To Ballyfin, a regency period manor hotel and grounds, located west of Dublin, I bow to your beauty, brave efforts—and triumph—in providing a stay unlike any I—we—could have imagined. www.ballyfin.com

We stayed for two nights, by a friend’s great generosity of spirit. Thank you, G., and you intrepid Geminis. We are friends, most of whom have met yearly for forty years to celebrate ourselves and our birthdays.

I managed to work on a book chapter while seated, imperiously, in the manor’s drawing room. (Note the incongruous iPad and bottle casually set on a priceless antique.) Old conversations and a distinct sense of the past hung in the air above me, but of an indifferent sort. 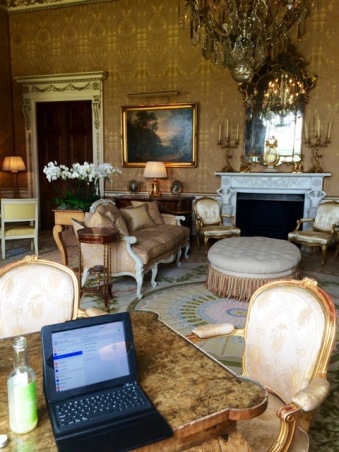 I felt no notion of intrusion, either by me or whomever, and I was alone with my thoughts for a good period of time, until two gentlemen commandeered one of the sofas from which to enjoy afternoon tea; this brought by one of the wait staff. These beautiful young men and women seemed to know exactly when to ask if you needed anything, and, when to ignore. Had they been trained at Hogworts? Forgive me. It slipped out. Like an incantation.

But it is a magical place. I’ll never forget it. I hope to return. Someday

On this trip I was met with friendliness and assistance at every turn. I want to underscore this. Perhaps in strange times such as these, the impetus to show kindness is somehow more pronounced, as an energy principle, as it were—to right the cock-eyed imbalance. We are thus impelled and compelled to encourage the evolution of the species by these small gestures. A “light correction” is what it’s called in horsemanship or dog training. Which leads me to trajectories. . .

Patricia Sun, a philosopher I enjoy, teaches the wisdom of self-correcting—before the trajectory of an action becomes impossible to change. Kindness goes a long way in achieving this. Civility. Manners. And so does speaking one’s own truth, but with respect. Most days I try to do it with storytelling.

What can you do?